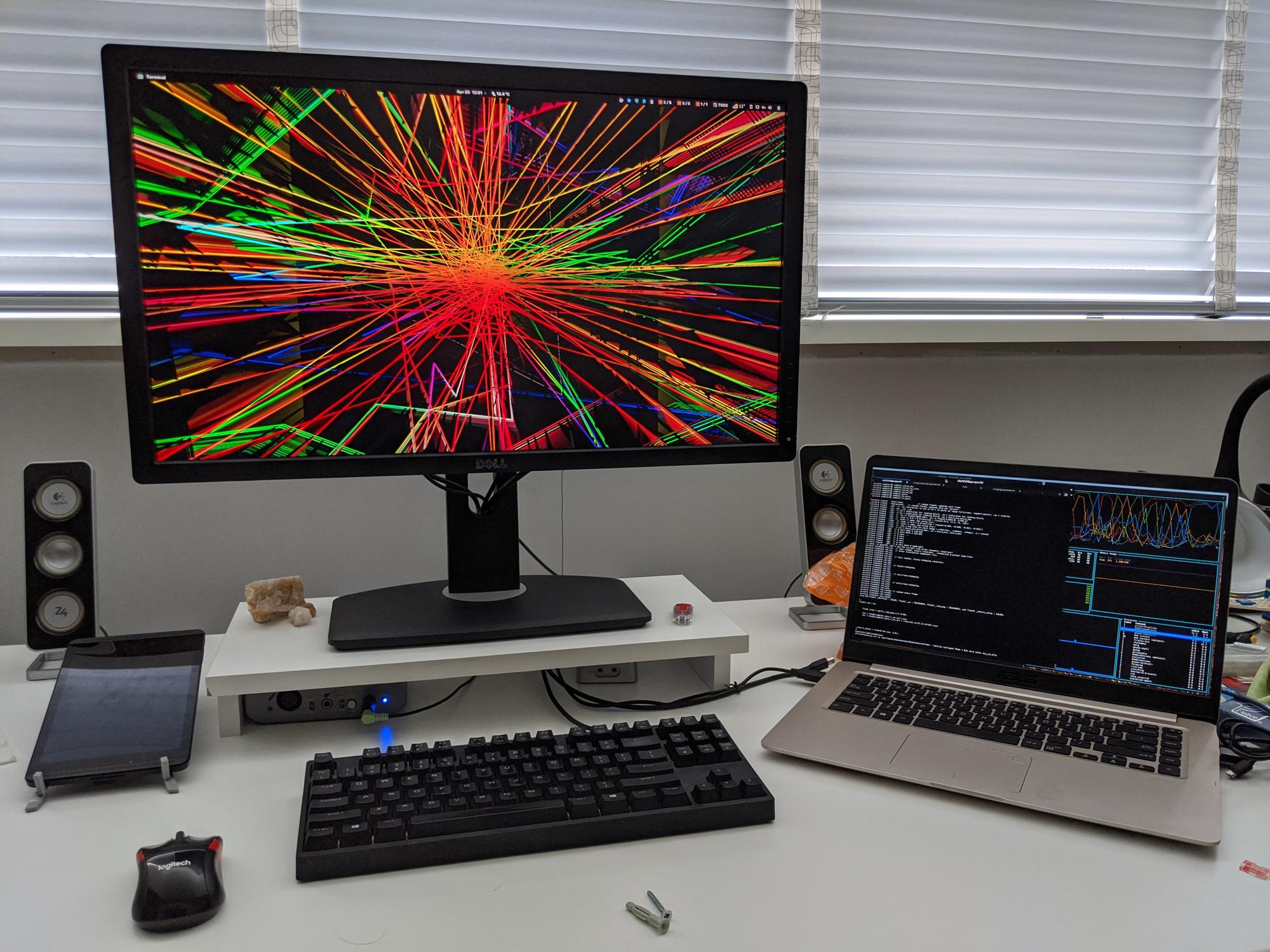 Lately, I was thinking back to the time when I had my 15" CRT monitor (and later my whopping 19" flat CRT) tuned to the beats that Winamp was playing for me. It was a famous plugin called Milkdrop, and it provided nicely psychedelic looking visuals based on the audio and beats that Winamp was playing at that moment. I often had it just running during music playback while doing homework, reading or otherwise just chilling in my room.

I knew about projectM, which is an opensource re-implementation of all of this, with support for the original presets and visualisations. It both provides libraries to include in a music application, as some stand-alone binaries that plug into PulseAudio or Jack. The fun part of the latter is that you can use whatever audio source you want (including Youtube and such), run projectM and have it all work seamlessly together. Count me in!

After some digging around, I came to the conclusion that pre-built binaries in Debian and Ubuntu were ancient, and basically only Arch had up-to-date stuff. No worries, lets build from source. Oh, that has a few gotcha's, as the various howto's I found online were already outdated, or tried to do too much (I do not need Jack integration, PulseAudio will suffice).

I successfully built and used the visualisations on Ubuntu 19.10 and the new 20.04, with the same steps.

Then clone the project or download the latest release, and cd into the directory. From there, do:

This will list the things that will be enabled in this build. Make sure both Qt and PulseAudio have a yes behind them, like here:

This means the Qt frontend will be built, and Pulseaudio support will be included.

The first command will take a while, the second will take care of installing the binaries, libraries and all the plugins, and will be done a tad faster. You might see some warnings during the make, especially in the Qt code, but as long as it's just warnings, you will be fine.

You can now start projectM by launching projectM-pulseaudio. Right click the window that appears and fiddle with the settings as you please. Play some music and ensure the right Pulseaudio output is selected. Enjoy!

COVID-19: day 82, on which I personally check whether the office is still there

This week, me and my colleagues started using the office again. It's a bit awkward, but also good to see each other in the real again. We keep the amount of people in the space low, so not everybody is here at the same time. Transparent dividers have been ordered …

Great resource of science fiction books, recommended by author David Brin. Lots of really fascinating reads; I haven't read half of them yet, so will surely use this list for inspiration. Source: David Brin's science fiction recommendations

Draft digging time! Something I've had in my drafts since the 25th of October, 2014, apparently: Roundcube is a decent self-hosted webmail solution, which benefits from integrating Google Contacts so you do not have to duplicate your address books (assuming you use Google for yours). Luckily someone wrote a plugin …